The highest finishing Championship 6 driver will receive a trophy and crowned the 2021 Early Bird Cup champion.

If traffic is around you, announce your intention to pit.
Position yourself in the right hand lane for entering & exiting the pits.
Exit the pits on the backstretch during practice and races.
Drivers may not drive through more than two (2) pit boxes prior to and two (2) pit boxes after their respective pit stall.

• The Six-Race EBR Cup Series Chase will begin at Richmond on April 23, 2022 and feature 10 drivers and two elimination rounds, with 6 drivers competing in the Championship 6 at Charlotte Raceway.

• The first round, called the Contender round of 10, consists of the races at, Richmond, Talladega, and Dover. All chase drivers will start with their points adjusted to 2,000 + 2 points for each win. If a driver wins a race in the Contender Round of 10, the driver automatically advances to the next round (Driver must race all Contender round races to qualify for the win and in).The remaining available positions that have not been filled by wins will be filled by points.

• The Eliminator Round of 8 consists of the races at Martinsville and Charlotte Roval. All chase drivers will start with their points adjusted to 3,000. Drivers who win a race in the Round of 8 automatically advance to the Championship 6 Round (Driver must race both races in the Eliminator Round to qualify for the win and in).The remaining available positions that have not been filled by wins will be filled by points.

• Championship Round at Charlotte Speedway - The highest finishing Championship 6 driver will be crowned the 2021 Early Bird Cup champion. Points do not count, finishing position only.

• Tiebreaker: If any position comes down to a tiebreaker in the Contender or Eliminator rounds , only the races in those Rounds matter. Wins and finishes in the regular season won't, If two drivers have the exact same finishes, the tiebreaker then goes to the driver who scored the best finish in the last race of that round.

• Regular season Ties are broken by most wins, most top 5’s and then by the driver who finished highest in the last race of the season. 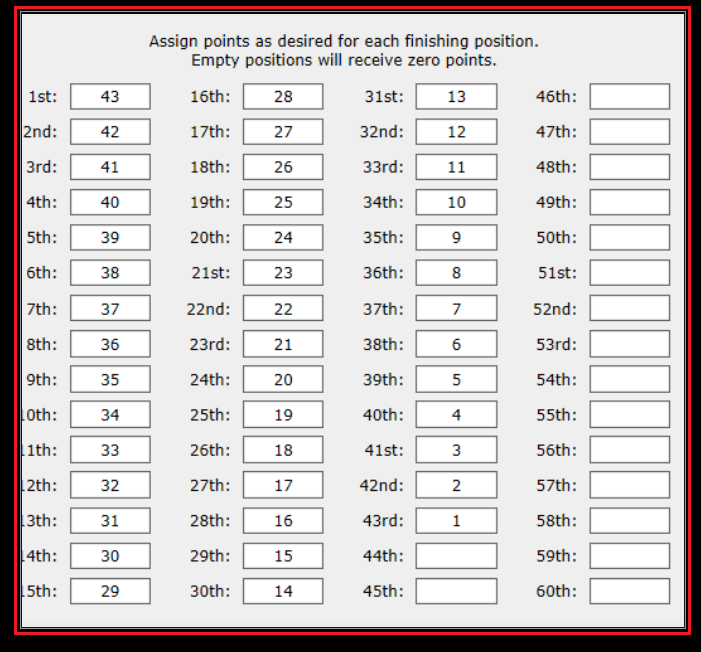